Back to the top

Lightning Hall is an artist who blends the soulful sound of early acoustic and electric blues with folk, roots rock and other styles. Like revered jazz guitarist Django Reinhardt, he plays, and plays well, in spite of serious burn injuries to his hands. A regular performer in the Albuquerque, NM area for several years. He grew up in the Gulf Coast city of Galveston, TX. where he acquired a taste for blues, southern rock, country, R&B… Southern music in general.

He sings, plays guitar and harmonica and writes and performs original songs and the songs of classic acoustic blues masters like Lightning Hopkins, Big Bill Broonzy and Muddy Waters and other “folksters”. And through the use of 21st century technology, Lightning Hall has begun performing as a one man electric blues band.

Lightning Hall is committed to creating and performing quality original music with an original voice. He refuses to be a “walking jukebox” of the endlessly rehashed Contemporary Top 40 and Classic Rock tunes so many bands perform, preferring to present covers of music less often heard, and with an authentic and individual take.

Blues Machine, his first release, is comprised of eleven acoustic originals with harmonica accompaniment. It is filled with folk-blues and Americana that “paint vivid portraits of the the lives of his characters with words”. Secrets and Ruins, his second, is filled with eight originals painted with an acoustic roots, folk and blues brush. They draw inspiration from western ghost towns, and the great depression. Gasoline, his third self produced release, debuted In February 2019 and has eight new electric band originals with blues, blues rock, R&B and funk influences.

He has been described as a “very compelling blues artist” and one with “impeccable guitar work and a soulful voice” by blues-biz insiders and local promoters.

He supports animal rights and the ASPCA. 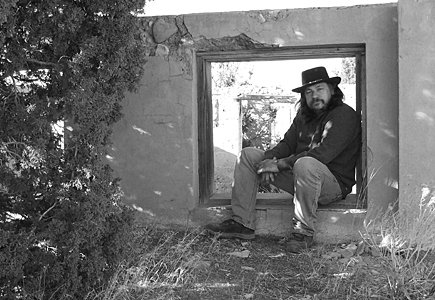